It’s often said that it’s better to have good friends rather than family, for at least you can choose your friends, but family, you’re stuck with. I count myself as being very fortunate to have been blessed to have grown up with a wonderful family, close and extended. 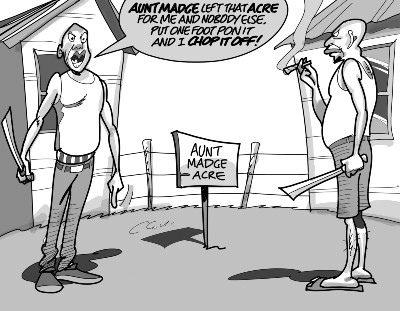 We were surrounded by teachers, as my mom and my aunts were of that profession, plus post mistress, uncles and cousins who were principals of schools, parsons, doctors, lawyers, bank managers,  engineers, bus conductors, a varied mix that possessed one thing in common, integrity.

They were by no means perfect, but we were a tight knit unit that always looked out for each other, courtesy of the grandparents who instilled old time values that were passed down through the generations.

I really looked forward to spending time with kith and kin in the rural country, relishing those summer holidays running up and down in the bush taking in nature.

The point is, family life can be beautiful and rewarding if you have the right family. But it can be hellish if it’s filled with crosses and folly.

When the family war is between the family members it’s disconcerting, damaging, debilitating and devastating. From birth to death, it’s nothing but quarrels, jealousy, envy, badmind, spite, malice and even murder, right within the family. People who are exposed to this naturally assume that it’s the norm, for that’s all they know.

Now I am not waxing evangelical here or blustering biblical, but the harsh truth is, we are seeing a level of family conflict nowadays that is more than concerning. Okay, we always had the family folly brought on and fueled by land and property disputes. Everyone wants a piece of the pie and willing to kill or die for it as they claim what they believe is rightfully theirs. “Aunt Madge left that acre for me and nobody else. Put one foot pon it and I chop it off.”

Very often these disputes lead to machetes being brought into play, all over dead-left land that fuels family folly.

My grandmother used to say, “When the breed is bad, it just bad, and nutten can fix it.”

In other words, some families are just destined to be warlike, doomed to discord, damned to destruction.

The saying used to be that blood is thicker than water. Really?  Mercifully these family wars are in the minority, but they are prevalent enough to be of concern. There are also the minor conflicts where malice infuses itself into the fabric of families, resulting in sisters not talking to each other for years, or children abandoning the rest of the family, never to be seen again.  This bad feeling runs so deep that not even family funerals they attend.

One child grows up to be somebody that just loved to learn,

And another child grows up to be somebody you’d just love to burn,

Happily I still see glimpses of harmony in some families nowadays, with love being the overarching feature, albeit mostly over the internet. But dog nyam yu supper if you’re immersed in a family folly and can’t escape.

This email address is being protected from spambots. You need JavaScript enabled to view it.