Kingston, Jamaica – The seaside gem of Bluefields in Westmoreland, with its beach providing countless hours of leisure for Jamaicans from all walks of life for generations, had its beginnings, like several southern Jamaican townships, as a hideaway for pirates. It was a base from which they could replenish their stocks and plot further raids on Spanish ships and ports at the height of the age of competition between European powers for dominance in this hemisphere. 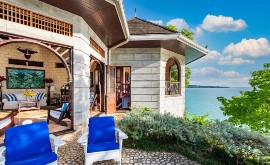 The town is reportedly named after one of the better known privateers, Abraham Blauveldt, a Dutch Jew who had made quite a name for himself throughout the Western Caribbean – particularly Nicaragua, where the similarly named town of Bluefields still stands – in the early 16th Century.

Forward some five centuries later, and Jamaica’s Bluefields is still a much sought-after hideaway, but now, its travelers of a much different type, who come in search of the respite offered by this secluded bay with its tranquil beauty.

What visitors find upon arrival is an experience to be treasured.  The six Bluefields Bay Villas, ranging from two to six bedrooms, each have a private pool and a dedicated staff – chef, butler and nanny (if required).  Spacious living and dining areas are enhanced by unhindered views of both the sparkling seas and the lush yet expertly landscaped grounds.   There’s also private access to the legendary Bluefields beach and kayaking, paddle-boarding and other aquatic activities are all at the ready.

While each villa has a distinct look and feel, there is a unifying aesthetic that only becomes obvious when one has had the opportunity to view them all, from San Michele house sitting palatially on the opposite side of the bay, through the imposing façade of Hermitage to the more intimate Cottonwood.  Large ocean-facing windows and terraces allow for commanding views of the expanse of the Caribbean Sea, even as the western mountains refuse to be upstaged (as will be shown by a walk around the property). Together, they reflect another duality, that of traditional Jamaica holding its own and contrasting perfectly against the inevitable march of modern life. 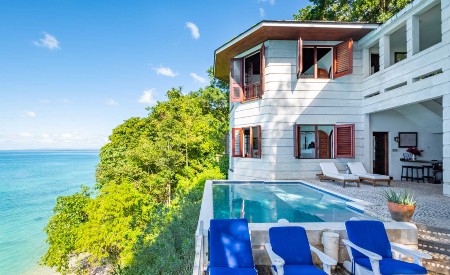 Perched on the edge of the bay is Bluefields Bay Villas resort’s most energy efficient luxury suite, Providence House with its daring private pool.

This balance continues once inside the villas, with modern fittings and amenities being showcased in tandem with more traditional touches, including a tastefully eclectic art collection, fine chinaware and some of the best examples of Jamaican woodworking and furniture craft available anywhere. So coveted, in fact, that a previous guest once hired away the entire Bluefields woodcraft team to go and work in his own furniture-making operation in the U.S. – a somewhat painful (from the resort’s point of view) yet undoubtedly powerful endorsement of the Bluefields offering.

But physical charms, whether provided by nature or by human hand, are just one aspect of the Bluefields appeal. The true quality of a resort lies in the ability of the people on hand to make guests feel at home (and in most cases, even better than home, by guests’ own admission). Thanks to the enterprising spirit and dedication to excellence of owners, the Moncure family and their naturally hospitable and adaptable team, the service is the most unforgettable aspect of the stay.

Whether it’s the butler, chef, beach attendant or maintenance crew, the Bluefields staff all retain and display a courteous yet unobtrusive manner that is immediately endearing.  As Managing Director Houston Moncure states, “We make every effort to know guest’s preferences and to follow through on delivering them – the first time and every time thereafter.”

And it works. At this point, repeat guests – and a substantial portion of the guests falls into that category - come expecting to have their usual butler, who knows not only what to serve and when, but importantly, how to wait on guests without overstating their presence. Critically also, as Moncure points out, the same excellent treatment is meted out to each and every guest – whether first time or tenth, whether celebrity or unknown.

This includes the delectable meals (a beef short rib in a red wine sauce served at dinner the first night truly ranks among the best meals this writer has been privileged to partake of) and the whole gamut of cocktails and other beverages - including the signature in-house creation, the “Bluefields B”, or their world-beating pimento liqueur.

The resort prides itself on its devotion to local, in-season ingredients. As Guest Service Manager Carmen points out “we try to source the best quality produce, whether from the immediate area or from St. Elizabeth. We really try to use the freshest food available – fresh fruit, in season, fresh fish taken off the boat that very morning.”  In addition to better taste, this approach helps to ensure the sustenance of a “virtuous cycle” of keeping resources in, or as close to the community as possible, for greater economic impact.

Indeed, many of the staff hail from the surrounding communities, and several of them are second generation, in that a parent or older sibling or relative preceded them at Bluefields, and they are happy to claim their own place in the expanding Bluefields family.

Beyond the property, the resort has also steadily deepened its presence within the community. In 2009, the establishment of the Bluefields Villas Foundation – the non-profit arm of the enterprise - made official an ongoing social outreach program that had been in practice for years. The Foundation supports the coastal safeguarding efforts of the Bluefields Fisherman’s Friendly Society by consistently donating funds towards petrol and other essential items for crew members who work to prevent over-fishing as well as fishing in restricted areas of the bay.  The Bluefields People’s Community Association also gets regular donations from the Foundation towards its anti-litter program, and has received 30 computers at its center which benefit adults who are enrolled in evening classes at the facility.

Thus, the Bluefields Bay Villas proprietors continue to work to enhance and perfect an already outstanding resort model, one that blends traditional and contemporary touches, as well as the inimitable Jamaican vibe to ensure that guests feel right at home (and truthfully, even better than many homes).