Celebrating its inaugural flight to The Bahamas last month, the Denver-headquartered Frontier Airlines added this major leg to its growing Caribbean routes. The Miami-Nassau nonstop flight is an important market for Bahamas tourism, and may prove to be a lucrative addition for the low-cost airline. 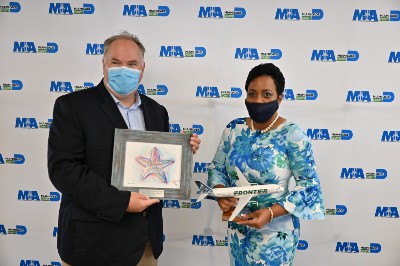 “Nassau is a premier destination from the United States and we are excited to bring low fares to one of the largest routes to the Bahamas. It will benefit both tourists who want to visit and Bahamians who want to get away to South Florida,” said Barry Biffle, Frontier Airlines CEO.

The airline is also adding nonstop flights from Miami to Costa Rica and St Maarten this month, bringing its Miami nonstop routes to 33, a move that highlights the airline’s commitment to making travel to popular vacation destinations more accessible for South Floridians, the CEO added.

With an innovative frequent flyer programme and creative purchase options that include buying in bundles, Frontier is aggressively growing its presence in the Caribbean and will continue expanding in the region for several years to come, according to Biffle. And, in spite of the disruption to the travel industry as a result of the COVID-19 pandemic, the airline has ‘weathered the storm’ by keeping costs down and looking to novel ways of increasing its customer base, emerging without any staff or salary reductions.

Among its creative incentives, the carrier offers potential passengers the ability to customize travel to their needs and budget. For example, customers can purchase options a-la-carte or in one low-priced bundle called the WORKS. This bundle includes refundability, a carry-on bag, a checked bag, the best available seat, waived change fees, and priority boarding.

As well, Biffle explained that the airline has taken all precautions necessary to ensure passenger safety as air travel begins to grow again, noting that “the vaccine is unlocking demand and people are feeling safe again. Also, we have proven that flying is very safe due to the air quality onboard.”

In fact, the company emphasizes that during flight, main cabin air is a mix of fresh air drawn from outside and air that has been passed through an air filtration system that features HEPA filters capable of capturing respiratory virus particles at more than 99.9% efficiency —similar to those used in hospital environments. Plus, Frontier’s modern all-Airbus fleet is among the youngest in the world, with an average age of approximately four years.

Serving roughly 120 destinations in the US, Caribbean, Mexico, and central America the company operates more than 100 A320 family aircraft and has the largest A320neo fleet in the US. The use of these aircraft, Frontier’s seating configuration, weight-saving tactics, and baggage process have all contributed to the airline’s average of 43 percent fuel savings compared to other U.S. airlines. The result is continued growth evidenced by airline’s approximately 150 new Airbus planes on order.

The industry is expected to fully bounce back by 2023 and Frontier is poised to be amongst the top. Biffle is optimistic about the airline’s future.

“We can’t speak for the industry but having the lowest costs and providing the lowest fares for customers is what we believe ensures we keep winning!”