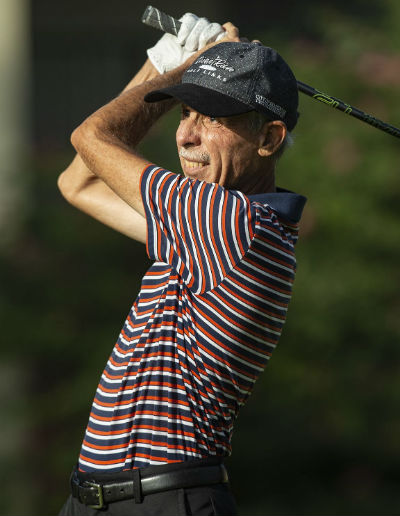 But there’s a darker follow up to the famous Oscar Wilde quote, “But sometimes age comes alone.”

Scheid won’t have any problems with that conclusion, he’s been finding his way to the tee boxes, fairways and greens with other golfers for 70 years.

“I started playing golf in 1950 when I was seven years old,” he said days before his early May, 77th, birthday.

Included in those 70 years of golf are 18 Florida Senior Games appearances stretching from 1999 to 2019.  Scheid began fastening his bag into the cart competing in the 55-59 age group and in 2019 was in a foursome of 75-79 age group athletes.

During the combined 18 rounds at the Florida Senior Games, the left handed Scheid took a total of 1,515 strokes en route to 10 medal-winning performances.  He advanced to the National Senior Games and won gold medals in 2003 and 2005, playing in a three-round tournament format.

His time on the course at Florida Senior Games events have resulted in scores between 73 on the low end and 87 on a not-so-good day.

His most recent Senior Games outing, the 2020 Gulf Coast Games for Life, at the Links at Greenfield Plantation in Bradenton, Scheid carded a 73 for the lowest score of all golfers and a 75-79 age group gold medal.

“I like golf because you learn new things every time you play,” he said. “With all that I know, I should be better. I’ve learned a lot over the years, but just can’t do them as well now.”

Now wait just a minute.  Scheid won the 2019 Florida Senior Games gold medal in the 75-79 age group with a 77, the lowest 18-hole total of the two-day competition.  He finished six strokes ahead of the silver medalist, and had the overall low score of the 2020 Gulf Coast Games for Life.

Those numbers seem to dispel Scheid’s claim of a decrease in skills.

Besides the twice a week schedule of outings on the golf course, Scheid has been practicing yoga since he was 19 years old; something he claims he started doing long before it became as popular as it is today.

“I get a lot of satisfaction from all the things I do to stay healthy and active,” he said. “It’s good to see it come to fruition. I’m aging a lot better than most people my age.”

Scheid, Richard and Lionel Pepin, brothers from Lakeland, and Larry Rule of West Palm Beach, took four of the top seven spots in the 75-79 age group. On the course that day, a few tips were probably shared, a few stories and jokes were told and certainly some good, old fashioned ribbing took place.

“It was a big deal for me to go to Fort Lauderdale,” Scheid said of his trip to the 2019 Games. “I don’t usually venture too far out of the area.  Played with a good bunch of guys that day. We’re all fighting the same battles.”

Their camaraderie continued into the clubhouse for the post-round lunch and awards ceremony at the Jacaranda Golf Club. As Scheid’s name was called as the gold medal winner and he made his way to accept the award, his long-time competitor Larry Rule yelled out, “Let’s hear it for the old guys!”

After all the years on the golf course, it all comes down to one thing for Ed Scheid.

“I like to win,” he said. “I like to compete and see what I’ve got. It’s a good test after all of the practice you put in.”

Throw in some wisdom while we’re at it and let’s hear it for the old guys.