Unions in The Bahamas Disagree on Agreement Signed With Opposition Party

NASSAU, Bahamas – At least none affiliated members of the National Congress of Trade Unions Bahamas (NCTUB) have distanced themselves from a memorandum of understanding (MoU) signed between their president Bernard Evans and the main opposition Progressive Liberal Party (PLP) ahead of the September 16 general election. 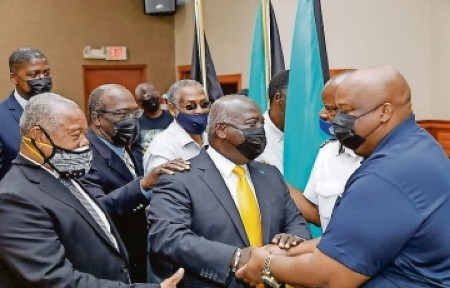 PLP leader, Phillip Davis with yellow tie, greeting trade union leaders following the signing of MoU (Photo courtesy PLP)But the NCTUB is maintaining that the agreement is above board and has referred to the dissenting unions as “rogue elements”

In a joint statement, the nine affiliate members said that they wanted to bring to the attention of the public the fact that “we were not involved in the signing of a memorandum of understanding with the Progressive Liberal Party (PLP) that was allegedly signed (on Wednesday).

“We have never seen the document, we are not aware of the contents of the MoU and it has not been tabled, discussed or ratified by the NCTUB. In fact, the NCTUB has only held two meetings since January 2020.”

In addition, they are contending that the Central Council did not ratify any document and as a result, the signing does not represent all affiliated members.

The MoU commits the PLP to ensuring that long-standing union issues are resolved, and the function of the united unions continues in the best interest of workers should the party win the next general election.

The unions said that they are disappointed that Evans, “who openly announced more than two months ago that he was quitting the labor movement without even informing the affiliates…is now making a mockery of the NCTUB.

“We, the affiliates, have ‘no confidence’ in President Bernard Evans and for several months we have been asking him to resign (vacate the seat). This disingenuous action of a ‘purported signing’ on our behalf is the ‘straw that has broken the camel’s back.

“This is in contravention of our constitution and we refuse to stand idly by and allow our members to be used as pawns. We would like to reassure the members of our various unions that we are committed to continue to serve you and we are not involved in pushing anyone’s personal agenda.”

But the NCTUB has described the affiliates as “rogue elements” with NCTUB Assistant Secretary General Daniel Thompson in a statement, noting that “the executives of the NCTUB are disappointed that the rogue elements of the congress who seek leadership of the same, are prepared to bring into the public domain matters internal to the organization. We will not be tempted to behave likewise.

“Suffice it to say that the majority of the affiliates of the NCTUB have the confidence in the current leadership which has been ordered by consent by the Supreme Court, to remain in place until matters brought by rogue elements of the congress are fully disposed of,” Thompson said, adding that “the unsigned document is full of misinformation and half-truths. It also includes unions that are observers of the NCTUB”.

Thompson said the MoU was an extract of the Workers’ Agenda developed by the two umbrella trade unions.

“Notwithstanding the signing of the documents as approved by the Executive Council of the NCTUB, it is pending the ratification by the Central Council of the NCTUB. The document was discussed and approved by the executive board in its August 24, 2021 meeting at which a majority of executives were present. The document, the Workers’ Agenda, is the culmination of discussions with NCTUB and CBTUC affiliates over the last several months.”

The issue has further divided the labor movement here with the Bahamas Union of Teachers president Belinda Wilson saying that she is of the view that Evan’s involvement in the MoU was for a “personal agenda.”

“I follow underneath the Trade Union Congress. This invitation was sent to every grouping. Not just the PLP. The FNM, PLP, Coalition and the DNA and whomever else,” Wilson added.