PORT OF SPAIN, Trinidad – Trinidad and Tobago is celebrating its 59th anniversary of political independence from Britain on Tuesday without the traditional military parade and other public activities but with contrasting messages from the two main political leaders in the oil rich twin island republic. 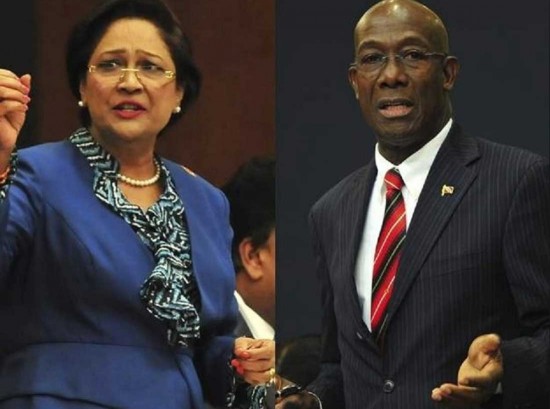 Prime Minister Dr. Keith Rowley (right) and Opposition Leader, Kamla Persad Bissessar (left) (File Photo) Fellow citizens, it is my pleasure to extend warm greetings to you on the 59th anniversary of our country’s Independence. These sincere wishes are extended from the Government of the Republic of Trinidad and Tobago, my family and myself, as Prime Minister.

While Prime Minister Dr. Keith Rowley urged Trinidadians to adapt to a 21st century “becoming more aware of emerging realities and trends” Opposition Leader Kamla Persad Bissessar citizens on this independence day have seen all their rights “suspended and for no good reason”.

The independence celebrations have been curtailed due to the coronavirus (COVID019) pandemic that has killed 1, 285 and infected 44,606 others since March last year when the first case of the virus was detected.

In his message, Prime Minister Rowley said that 59 years later, it was important for Trinidad and Tobago citizens to refine “not only of your individual rights,  but more so your responsibilities.

“We all hold in our hands, very respectfully, the rights and, most importantly, the responsibilities of each other. Once we fully recognize our obligations and rights, that all citizens hold an equal share, we can take charge in shaping a better, collective future; not only for ourselves, and families, but for all others and all future generations who will call these twin islands home.”

He said the world is caught up in the COVID-19 pandemic, but at the same time, human beings are facing other threats, specifically, global climate change, alongside challenges in resource depletion, and fundamental changes in technology, business, education, health services, work; our overall way of life.

He warned that Trinidad and Tobago and indeed the Caribbean will be affected by what two United Nations bodies described as the  “worldwide ferocity of global warming, hurricanes, storms, floods, wildfires, droughts, the loss of biodiversity, shrinking glacier ice, marine heat waves, indiscriminate clearing of forests, pestilences…all leading to irreversible damage to “Mother Earth”.

Rowley said that the past 18 months have been difficult if not destructive for the world economy, and also for Trinidad and Tobago mainly as a result of the impact of COVID-19 and the collapse in energy prices in early 2020.

“During this time the Government had to protect the lives of our most vulnerable citizens. This has placed a continued strain on the treasury, but the Government is determined to take care of the neediest.

“An unprecedented scenario called for unprecedented responses from everyone. As a people, we have dug deep, tapping into our innate resilience, our strength and shown our ability to adapt and cope with these changes.”

But Rowley said “we may be bruised, but we will not be defeated. I know we can overcome the challenges of the 21st-century, and emerge from this crisis”.

He said in doing so, Trinidad and Tobago must acknowledge many economic opportunities are no longer available, but the global pandemic is creating new ones.

“Massive transformations are taking place in manufacturing, finance, medicine, security, business, music, fashion, food, entertainment, energy and climate. There is now a new world out there, which this country must first understand, then grasp “with boundless faith in our destiny”.

“Entrepreneurship is the key. Our citizens must unlock the Trinbago creativity, passion and energy. There must be a new mindset, new attitudes, new worldviews, searching every prospect, hungrily and courageously, to build businesses.

“We have to adapt to 21st-century changes, becoming more aware of emerging realities and trends, overcome the disadvantages of complexity, and develop indigenous Trinbago models,” he said, promising that “as a government, we will provide the necessary support and enabling environment”.

He said the recent establishment of the Ministry of Digital Transformation will be mapping our transition towards a digital economy.

“Other sectors, some traditional and some new, will receive renewed focus as we will take meaningful steps to build, re-build and create further opportunities.”

But in her message, Persad Bissessar said that while it is “safe to say we have indeed come a long way” since attainting independence “we still have far to go”.

But she said that nothing of the past can compare to what citizens are being subjected to today.

“It is an insult to our constitution and the pioneers of our independence that on Independence Day 2021, all our citizens’ rights are suspended for no good reason.

“The Executive Arm has full authority to utilize these emergency powers but with good reason. Implementing the State of Emergency – the ultimate legislative tool rendering all rights and freedoms non-existent must only be used as a last resort.

“Therefore, this Independence Day is a solemn one. For whilst we mark 59 years an independent nation, we do so with none of our constitutional rights and freedoms. I however remain confident in the collective will of our people to get through this dark period in our history. “

Persad Bissessar, who lost two consecutive general elections here since 2015, said that while the country is battling the COVID-19 pandemic, “we are led by an incompetent government incapable of leading us out of this crisis.

“The past two years have been difficult. We have lost loved ones, friends, colleagues. And thousands have lost their livelihoods.

“We are at a critical juncture, aside from dealing with COVID-19, we are well on our way into a major economic pandemic. Our livelihoods, our wellbeing, even our very democracy have all never been under greater threat than they are today.

“We cannot do as the PNM (People’s National Movement) government is doing, burying our heads in the sand, locking down the country, and hoping the virus goes away. There must be a clear plan to create jobs, generate revenue, and develop the right environment to encourage new business development.

“The UNC (United National Congress) has a prepared plan that will ensure resilient economic recovery and growth ensuring a rebounding economy,” the UNC leader said in her message.

Meanwhile, the Caribbean Community (CARICOM) has congratulated Trinidad and Tobago on its 59th anniversary of political independence, saying the country “has achieved a considerable level of socio-economic advancement including the many achievements of its creative people, who continue to excel at home and abroad in many fields including academia, the arts, diplomacy and sport.

“The Caribbean Community has benefitted tremendously from the commitment of the Government and people of Trinidad and Tobago to regional integration, and your country continues to play a lead role in advancing the integration process,” said the newly appointed CARICOM Secretary General, Dr Carla Barnett in her congratulatory message.

The United States also extended congratulations to Trinidad and Tobago.

Secretary of State, Antony J. Blinken, said “as close regional partners, our countries are working together to respond to the COVID-19 pandemic and other health challenges, increase mutual prosperity through trade and investment,  and counter transnational organized crime and other threats to regional security.

“Our strong collaboration through regional and multilateral institutions like the Caribbean Community and the Organization of American States allows us to strengthen democracy and security throughout the region, benefitting citizens of both our countries,” he added.