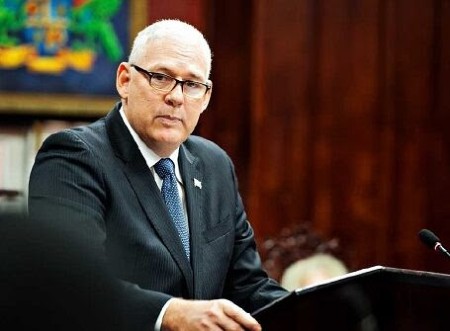 The UWP, which was booted from office in the July 26 elections in which the St. Lucia Labour Party (SLP) won 13 of the 17 seats, said that while it respects a new administration’s right to review foreign policy, “we consider such egregious statements potentially harmful to St. Lucia’s foreign relations, especially when our country is grappling with a worsening world pandemic”.

“It has been barely a week since his appointment as Minister for External Affairs and already the notoriously garrulous Mr. Baptiste has returned to his old habit of tossing verbal insults at our international partners. The SLP has long demonstrated a proclivity to attack foreigners, whether investors or visitors. This is a dangerous policy that could have far-reaching repercussions for St. Lucians at home and abroad,” UWP leader Allen Chastanet said in statement.

“One has to question why the priority of the new SLP administration is not to quickly as possible ensure St. Lucia receives donated vaccines from the United States. We have already received alarming news that St. Lucia is not on the list of the first Caribbean countries receiving vaccines from the US. At this time when we are experiencing an increase in COVID-19 cases, we cannot afford the negative rhetoric recently spewed by and the new foreign minister.

“He should be spending less time on vendettas while doing his utmost to ensure St. Lucia is not left behind,” Chastanet added, as he also questioned why the administration had not signed the requisite documentation with the US for St. Lucia to receive vaccines.

Minister Baptiste had made the controversial comments at the sidelines of the swearing-in ceremony of the new Cabinet on August 5.

He also charged that the Chastanet administration had largely destroyed St. Lucia’s relationships abroad during its five years in office and the new government now has to repair the damage.

However, in the UWP statement issued on Wednesday, Chastanet said his administration prided itself on the island’s foreign police and had worked hard to restore St. Lucia’s image and regional and international partnerships.

“The evidence is well documented. This is hardly the time to destroy these gains, when we need to maintain and increase good friendships with countries that traditionally have shared our ideals,” the former prime minister insisted.