ROSEAU, Dominica – Prime Minister Roosevelt Skerrit is urging Dominica to go out and cast their ballots in the December 6 general election that he has called two years ahead of the constitutional deadline, even though the main opposition parties continue to urge their supporters to stay away. 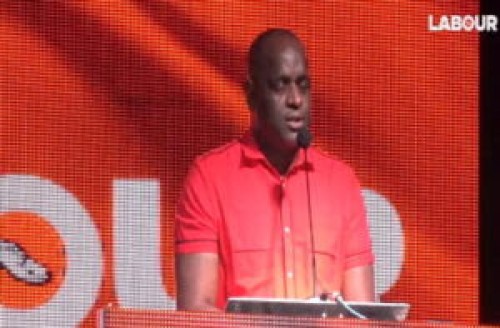 Prime Minister and DLP leader speaking in Portsmouth on Monday night (CMC Photo)Speaking at a public meeting of his ruling Dominica Labour Party (DLP), Skerrit, 50, who has been prime minister here since 2004, said that “not voting cannot be a choice in this election.

“We want to ensure that we get a resounding victory on December 6. As I have said on many occasions, not voting cannot be an option in this election. Voting is a choice each of us must make, but we always have to make the right choice.

“We cannot sit back and say Labour has won and I am not voting. It is absolutely important that every vote is counted in this constituency and that the entire constituency says to Fenella Wenham you have our support,” Skerrit told the rally in Portsmouth, north of here on Monday night.

Wenham is among the new DLP candidates contesting the elections in place of Trade and Industry Minister Ian Douglas.

Skerrit, one of six DLP candidates who had been nominated uncontested for the December 6 poll, said it was therefore important for Dominicans to go out and vote and ensure the party’s victory for control of the 21 seat Parliament. In the 2019 general election, the ruling DLP won 18 of the 21 seats in the Parliament with the remaining three going to the United Workers Party (UWP).

“It is very important and we are counting on this great constituency to come out in large numbers to vote for Fenella,” he said, promising that the constituency would be home to a new medical offshore university that would replace the Ross University that transferred its operations to Barbados in 2019 after 41 years here.

Thompson, who urged the membership to join hands with the new team to establish “a just and ethical system of governance in Dominica,” said in the coming days, the party will spread the message of unity throughout the island by “knocking on every door and going to every settlement to consult with the residents about the best course of action.

“Now is the time to set aside our political differences. And let us unite over free and democratic elections and ensure that there is peace in the land and ensure that democracy is restored to Dominica.”

The UWP is boycotting the December 6 general election that Prime Minister Roosevelt Skerrit called two years ahead of the constitutional deadline, insisting that electoral reform, including voter identification cards and a new voters list, must be dealt with prior to holding the polls.

“As a political leader, together we will continue to champion electoral reform. Again as part of that process, we will again appeal to the President of Dominica (Charles Savarin) to exercise his executive authority under section 53 of the Constitution and suspend those elections until there is electoral reform,” said Fontaine, who is on EC$75,000 (One EC dollar=US$0.37 cents) bail, on a charge of inciting violence and obstruction of justice, dating back to 2017,. “

The UWP, as well as the other major opposition party, the Dominica Freedom Party (DFP) have been urging citizens to boycott the elections until Sir Dennis Byron, the former president of the Caribbean Court of Justice (CCJ) completes his assignment as the sole commissioner advancing the efforts towards electoral reform.

Sir Byron had proposed presenting the first phase of his report by the end of November with the Parliament tabling the Register of Electors legislation in December and the plan to enact it in January 2023.