BELMOPAN, Belize – Prime Minister John Briceño has returned from an official visit to Venezuela signing a joint declaration committing to strengthening the close bonds of friendship and solidarity between the two countries. 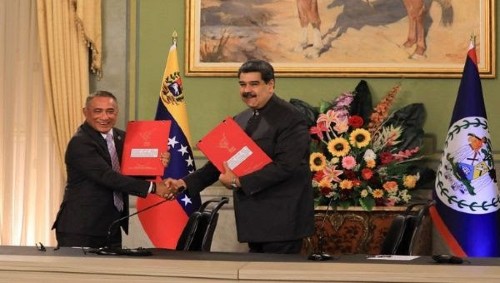 The statement said it was agreed that a Mixed Commission would soon begin work to advance this broad bilateral agenda.

It quoted President Maduro as announcing that Petrocaribe, a regional oil procurement agreement between Venezuela and Caribbean member states, was being renewed and expanded to cover products, in addition to petroleum, and that Belize would continue to be one of the beneficiaries.

The mechanism previously offered oil to recipient countries in the Caribbean and Central America on preferential and deferred terms linked to local development arrangements.

Supplies under Petrocaribe were suspended to most Caribbean states in June 2018 as a result of plummeting Venezuelan crude output, United States political pressure on Caracas and recipient countries, and falling world oil and gas prices, all making it more beneficial to purchase oil elsewhere.

In the past, Petrocaribe has supplied oil at market prices in exchange for a 40 per cent down payment with the balance being repaid over 25 years at one per cent interest and governments benefitting from the sale of oil and oil products into the market providing an immediate cash boost to government finances.

The scheme also provided for sliding scales of interest, moratoria on payments, payments through barter trade, and debt forgiveness under certain circumstances.

“It is time to multiply happiness, work, wealth, humility and love, for the union of the Latin American and Caribbean peoples,” Maduro added.

The government statement quoted Prime Minister Briceño as having recognized the efforts of the late president, Hugo Chavez, for engineering the innovative Petrocaribe initiative which has benefitted Belize and welcomed an early resumption of the program.

In October, St. Vincent and the Grenadines Prime Minister, Dr. Ralph Gonsalves, announced that his Caribbean country would be receiving an estimated 23,000 barrels of oil with the resumption of the PetroCaribe initiative.

Gonsalves had also said Caracas agreed to cancel St. Vincent and the Grenadines’ debt under PetroCaribe, and that Kingstown and Caracas are tallying the precise size of the debt and “it may be up to US$70 million, meaning EC$189 million”.

Gonsalves said Venezuela would half the debt of the other member countries of the Organization of Eastern Caribbean that are members of PetroCaribe, which will now be reset to offer fuel at 35 per cent discount to participating countries.

The Belize government statement said that both Prime Minister Briceno and President Maduro acknowledged the need to work together to strengthen regional cooperation through CARICOM and the Community of Latin American and Caribbean States (CELAC) “and reiterated their call to maintain the Caribbean as a Zone of Peace”.

In the joint statement, Belize and the Bolivarian Republic of Venezuela reaffirmed their respect for the Charter of the United Nations, international law and the Bandung Principles which guide the Non-Aligned Movement.

The statement said the meeting included important negotiations on the debts owed by Belize to Venezuela on which a new agreement was reached that brings substantial benefits to both countries. The leaders instructed their experts to promptly finalize the details of the new accord.

Prime Minister Briceño welcomed the offer by Venezuela to provide support to Belize in housing and fertilizer for Belizean farmers after the destruction caused by Hurricane Lisa.

President Maduro accepted the invitation of Prime Minister Briceño to visit Belize at a convenient time in 2023, the statement added.