GEORGE TOWN, Cayman Islands – Members of Parliament on Friday elected Katherine Ebanks-Wilks as the new speaker  following a vote held during a special meeting of the house. 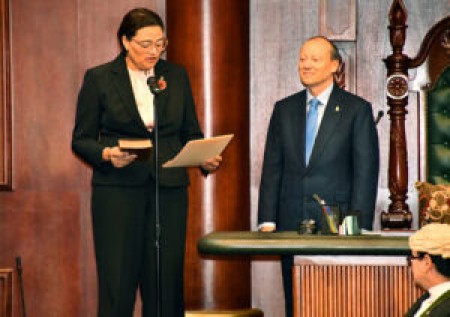 Katherine Ebanks- WilksEbanks-Wilks, 43,who has been an MP for 19 months, beat the only other person nominated, opposition member Sir Alden McLaughlin who has served in the legislature for more than 20 years, by ten votes to six, as MPs voted along party lines.

Ebanks-Wilks’ previous position of deputy speaker is now filled by Dwayne Seymour who crossed the floor last year to join the government benches as an independent.

After taking her seat in the speaker’s chair, Ebanks-Wilks said she was “filled with gratitude” to have been appointed to the position.

Ebanks-Wilks, the fifth and youngest woman to sit in the speaker’s chair,  she never expected to hold such a high office so early in her political career and promised to be fair and discharge her duties “diligently, firmly and fairly”.

Her election comes after McKeeva Bush officially demitted the office of speaker last month, after resigning with immediate effect.

His resignation followed mounting pressure after police commenced an investigation into allegations of inappropriate behavior towards two women at a government cocktail reception back in October.

She has been fulfilling the duties of the Speaker since Bush’s resignation, as she was the deputy speaker.

Ebanks-Wilks was promoted to the Speaker’s chair and took her oath of office that was administered by Governor Martyn Roper.