WASHINGTON, DC, - Prime Minister Andrew Holness arrived in Washington on Tuesday for a five-day visit, from 6th -10th December, and was met on arrival at the Ronald Reagan International Airport by Jamaica’s Ambassador to the United States HE Audrey Marks. 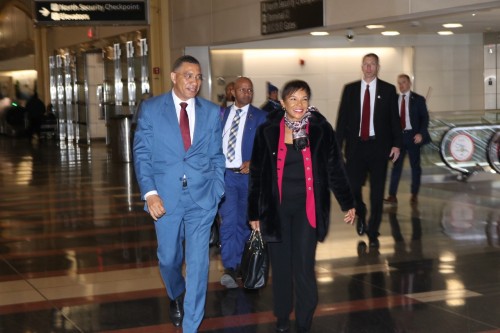 Prime Minister Andrew Holness is met on arrival at the Ronald Reagan International Airport in Washington DC on Tuesday December 6, 2022, by Jamaica’s Ambassador to the United States Her Excellency Audrey Marks. (Photo by Derrick A Scott)While in the US Capitol, the prime minister will meet with State Department Officials to discuss enhanced security cooperation with the US. He is expected to focus on areas of increased cooperation in light of the fact that a large number of US-based Jamaican American dons have been influencing the rising crime levels and murder rates in Jamaica.

The Prime Minister will address and participate in a Congressional Parliamentary Intelligence-Security Forum at the United States Senate Building alongside congressional leaders and parliamentarians from around the world.

The Forum, which is geared at developing security solutions through collaboration with the US and its allies, will see participation from over 70 countries. Among the topics to be addressed at the Forum are cyber security, human trafficking and money laundering.

Prime Minister Holness will also have meetings at the Department of Justice with the Attorney General’s Office to discuss the need to intensify action on the prosecution of targeted drug lords and leaders of various lottery scams.

In further support of his security agenda, the Prime Minister will be joined by the Commissioner of Police, Maj. General Anthony Anderson for a working meeting with various security agencies to include the Federal Bureau of Investigations (FBI), Department of Homeland Security (DHS) and the Bureau of International Narcotics and Law Enforcement Affairs (INL).

Prime Minister Holness has emphasized his intent on collaborating with the US Security and Intelligence Agencies to benefit from their capabilities to monitor and curtail crimes in Jamaica that originate from ganga within the United States who are masterminding international organized crimes and negatively impacting the peace and security of the country. –

On Thursday December 8, 2022, at 7:00 pm EDT, Prime Minister Holness will be a guest of Jamaica’s Ambassador to the United States, Audrey Marks on her monthly series, Lets Connect with Ambassador Marks.

Ambassador Marks said that the upcoming Christmas Edition of the forum will give the Prime Minister an opportunity to interact directly once again with the participants and deliver his Christmas message to the Diaspora.

Also scheduled to appear on the program, Ambassador Marks said, will be outstanding Jamaican American doctor, Dr. Robynne Chutkan, author of the new book “The Anti-Viral Gut” Tackling the pathogens from the inside out.

In addition, author of the book “Pieces of Jamaica’ The Jam Rock Edition, Jamaican American Photographer, David Muir, will also present his book in commemoration of Jamaica 60.