PORT OF SPAIN, Trinidad – Prime Minister Dr. Keith Rowley Monday said Caribbean Community (CARICOM) countries have an opportunity to increase the penetration of natural gas within the Caribbean, which will aid in providing a clean, secure supply of energy to regional countries as they transition away from sources such as coal and heavy fuel oil. 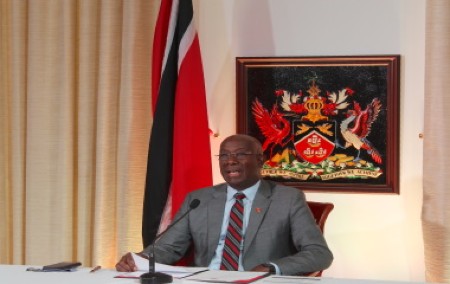 Prime Minister Dr. Keith Rowley addressing Trinidad and Tobago Energy Chamber’s virtual Energy Conference (OPM Photo)Rowley, who is also the chairman of the 15-member regional integration movement, told the virtual opening of the Trinidad and Tobago Energy Chamber’s Energy Conference that many Caribbean countries have already begun their transition to sustainable forms of energy, by incorporating renewables into their energy mix.

“We have seen Barbados and Jamaica set ambitious national targets for the utilization of renewable energy. Barbados is aiming for 100 per cent renewable energy by 2030, and Jamaica’s target set at 50 per cent by 2030. The collective targets of the CARICOM states set at 28 per cent renewable energy penetration by 2022 and 47 per cent by 2027,” Rowley told the audience that also included the President Chandrikapersad Santokhi of Suriname, his Guyanese counterpart, Dr. Irfaan Ali and the Jamaica Prime Minister Andrew Holness..

“There is an opportunity to increase the penetration of natural gas within the Caribbean, which will aid in providing a clean, secure supply of energy to Caribbean countries as they transition away from sources such as coal and heavy fuel oil. Historically, the challenges in bringing natural gas to these markets include the relatively small size of the markets and the need for the development of infrastructure for regasification, transportation and distribution.”

Rowley said that in a report entitled “Unveiling the Natural Gas Opportunity in the Caribbean”, the Inter-American Development Bank (IDB) identifies liquefied natural gas (LNG) delivery innovations in small-scale shipping and floating regasification units as avenues through which natural gas may be economically delivered to Caribbean countries with small markets.

He said Jamaica’s Floating Storage and Regasification Terminal which is the first of its kind in the Caribbean is a promising sign, and proof that there is room for natural gas in the Caribbean energy markets.

“This represents an area in which regional cooperation can be increased and countries such as Trinidad and Tobago, Jamaica and Guyana can lead the energy transition by harnessing our expertise among ourselves, as well as sharing experiences and learnings with other Caribbean countries.”

Rowley said that it is no secret that the Caribbean region, as a collection of Small Island Developing States (SIDS), stands to be significantly impacted by the adverse effects of climate change.

“We have already witnessed some instances of these adverse effects, such as the devastation on Dominica by Hurricane Maria in 2017. Despite our relatively minute contribution to global emissions, the Caribbean region has a vested interest in and support for global efforts to mitigate the effects of climate change, due to our vulnerability to the impacts of climate change.”

He said Trinidad and Tobago, even though it currently uses the cleanest burning fossil fuel for its power generation, is still aware that there is room for improvement and one of these areas which is a near-term priority is the minimization of emissions all along the value chain, from production of natural gas to its consumption.

Rowley said that the National Gas Company (NGC) here has embarked on a proactive campaign to reduce the carbon impact of its operations and last announced that it has become a member of the United Nations Environmental Program Oil and Gas Methane Partnership (OGMP).

He said the OGMP is a comprehensive, measurement-based methane reporting framework with standardized, rigorous and transparent emissions accounting practices.

“As a member of the Partnership, the NGC will voluntarily report transparently on its methane emissions, with an aim to reduce these emissions by utilizing global standards for methane emissions reporting, measurement and control.”

In his address, Rowley said that the region had been severely impacted by the coronavirus (COVID-19) pandemic and that the International Energy Agency’s (IEA) World Energy Outlook 2020 noted that, with respect to the energy transition, it was too soon to say whether the pandemic represents a setback for the efforts to bring about a sustainable energy future, or whether it would catalyze the energy transition.

“While we have seen many international energy companies and jurisdictions such as the European Union announce ambitious energy transition plans and targets, the IEA World Energy Outlook also notes that, with the pandemic still ongoing, many uncertainties remain and there are crucial energy policy decisions to be made yet.

“For some countries, like ours, the focus is to be on economic recovery, and the economic slowdown resulting from the pandemic has caught us making our first significant, deliberate steps towards clean energy.”

Rowley said on the other hand, the pandemic may have allowed some countries to accelerate the transition during a time when demand for fossil fuels fell dramatically, and presented an opportunity for energy transition incentives. He said Europe had dedicated Euro 225 billion (One Euro=US$1.29 cents) of its pandemic recovery fund to the energy transition.

“Key questions include how long the pandemic will last, the shape that recovery will take, especially in light of the varied pace of vaccination rollouts, and the extent to which energy and sustainability policies are built into government strategies to restart their economies. These remaining questions have significantly increased the range of pathways that the local and global energy sector could follow.”

But Rowley said despite these uncertainties, some things remain relatively unchanged. The energy transition is one of them, driven by technological advances, stakeholder pressure, changing regulatory environments, and increasing focus on Environmental, Social and Governance (ESG) issues.

He said while the pace of the transition may vary for different countries and organizations, the fact is that it is happening.

“However, it is important to note that there is no “one size fits all” solution. The strategy for each region and each country would vary, as each country is at a different starting point, depending on the available resources and the practices currently in place.

“For example, across the Caribbean, the sources of energy vary widely by country. Many Caribbean countries are still reliant on imported oil to support their primary energy demand,” Rowley said, noting that Trinidad and Tobago has been using natural gas for power generation since the 1950s, and has begun the process of including renewables in the energy mix.

“By contrast, there are countries within the Caribbean that are still utilizing coal, fired power generation, such as the 752MW Punta Catalina plant in the Dominican Republic, which became fully operational in 2020 and represents a third of the country’s energy demand. So, you can clearly see the contrast in the abilities of different countries to meet their energy demand.”

But Rowley told the conference that for his administration, one of the underpinnings of any transition strategy that it will adopt is that it must be able to continue to provide stability for the citizens of the country, both in terms of the supply of energy, and revenue to the country.

“The past year has underscored the importance of a secure and reliable supply of electricity throughout the country as large sections of the population worked and studied remotely.

In terms of revenue, the Government has a responsibility to the citizens to ensure that the country has a steady stream of revenue so that we can continue to meet their needs and to provide for those who need it the most, and so that we are well-positioned to provide economic stability in times of crisis, as we have been doing over the past year.”

Rowley said that one of the ways through which Trinidad and Tobago currently earns a steady stream of revenue is through the maximization of its natural energy resources.

“As is to be expected Trinidad and Tobago still has considerable resources in the ground to be utilized, and it is imperative that we continue to develop these resources or face their sterilization.”

“While oil may be up against a clock with less time on it, there is still significant potential for natural gas. As transition strategies begin to take shape around the world, it is becoming more and more evident that natural gas has an instrumental role to play in helping countries and organizations achieve their ambitious transition targets, and for the world as a whole to achieve our sustainable development goals using clean energy.”

Rowley said that the Gas Exporting Countries Forum (GECF) Global Gas Outlook to 2050, indicates that energy demand is expected to grow by 24 per cent by 2050. He said natural gas is expected to be the only hydrocarbon resource to increase its share of the global energy mix, increasing from 23 to 28 per cent in 2050.

“Demand for natural gas is expected to be boosted by cumulative economic and population drivers, environmental concerns, positive policy support in many countries, and increasing availability of supply.

“In the coming years, the International Gas Union expects that natural gas will continue to play central roles in global energy supply and de-carbonization. This is due to its many favorable attributes, which include versatility for heating and power and use as a chemical feedstock, price competitiveness, energy density, availability and clean burning properties,” Rowley told the conference.

He said that another area that appears to be a forerunner in many transition strategies across the world is the hydrogen economy. DNV, formerly known as DNVGL, forecasts that hydrogen, along with carbon capture and storage, will be catalysts for deep decarbonization in hard-to-abate sectors such as heavy industry.

Rowley said that his administration is currently exploring the feasibility and regulatory aspects of a hydrogen economy in Trinidad and Tobago and that the Ministry of Energy and Energy Industries (MEEI) has established a multidisciplinary committee to develop a hydrogen economy framework for Trinidad and Tobago and the committee should be presenting its preliminary report for the consideration of the Minister in the very near future.

He said additionally, the government has provided support to the National Energy Corporation in securing funding from the IDB for feasibility studies relating to hydrogen.

“The funding was secured under an IDB-executed non-reimbursable Technical Cooperation Promotion of the Green Hydrogen Market in Latin America and Caribbean (LAC) Countries. This cooperation will facilitate feasibility studies in 2021 that contribute to understanding the economical parameters of producing green hydrogen locally. The results will add to the work of National Energy and the MEEI to provide insight into hydrogen growth for the country.”

He said currently new investments are being readied to use renewable energy electricity to run through state owned Trinidad and Tobago Electricity Company T&TEC), to manufacture hydrogen, by a process of water electrolysis, to provide this product to ammonia plants in Pt Lisas, south of here.

“This major green investment has the potential generate significant tax revenues, temporary and permanent jobs as we green the economy. Upon completion, this US$300 million ill be the first green hydrogen project of its scale in the world. Not for the first time Trinidad and Tobago, in the energy sector is prepared to go where others have not gone before,” Rowley told the energy conference.