THE OTHER SIDE: Art Views Caribbean Future Through Visual Expressions

The possibilities of a Caribbean future is the focus of an exhibition featuring the works of 14 artists from the region currently on display in South Florida. 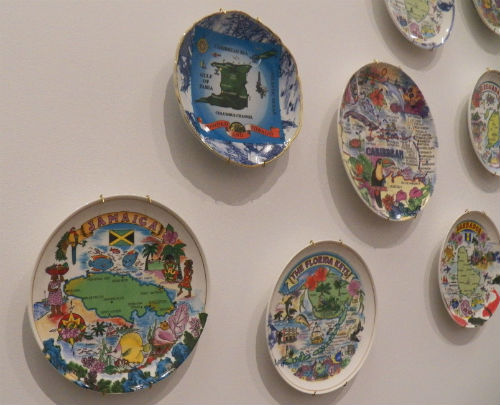 Souvenir plates by Milne looks at the Caribbean’s link to China.“The Other Side of Now: Foresight in Contemporary Caribbean Art”, which opened last month at Perez Art Museum Miami (PAMM), shows works based on artists’ personal experiences, the Caribbean’s geography and its colonial and ecological history.

Through paintings, installations, videos, sculptures and performances, “The Other Side of Now”, which runs through June 2020, makes clear the inevitability of more questions, perspectives and directions to come.

“We’re not just talking sun and sea and sand, but how do you see past that and see the depths,” explained Dr. Marsha Pearce, cultural studies scholar at The University of the West Indies, St. Augustine Campus, during the exhibition’s opening.

“… We wanted to think more about that fourth dimension - time. How do we address that, and how do we expand that and not just think about it as the Caribbean as a past moment or the present moment, but to push that picture of the Caribbean, to create a more full picture of the region.”

Curated by Pearce and PAMM’s Maria Elena Ortiz, the exhibition looks beyond the now. One example, is a piece by Trinidadian-born artist Alicia Milne which looks at stereotypes boldly and fights against them. She presents a series of souvenir plates that are made in China depicting typical Caribbean scenes. But the artist adds Chinese motifs to these plates as a way of pointing to Chinese involvement in the Caribbean. Perhaps a type of new colonial reality.

Puerto Rican Angel Otero’s work is another illustration of how Caribbean people use ingenuity to create their own future. He paints on glass then scrapes off the oil paint and hangs the resulting “skins” as new creations, producing expressionistic work that speaks to rebirth, which many go through after a devastating natural event.

“Catastrophe and trauma is embedded in a lot of the work you see out there, for obvious reasons,” said Ortiz.

“How can we instigate a little bit of a different kind of schematic within the field? When the 2017 hurricane season happened that was the moment in which the Caribbean was very much put into test and there was a lot of devastation. That’s also when our conception of time shifted a little bit, to think about the future as the present now.

“So, what can we do now, today, to create a better situation?”

As if to answer that question, artist Louisa Marajo from Martinique recreates work from previous pieces, demonstrating the act of creating, destroying, surviving and rebuilding the future; the kind of action that always takes place after something like a hurricane.

“It’s the idea of labor. And it’s also about a way of seeing.”

Jamaican artist Deborah Anzinger’s work is a complex language of labor, economics and survival. Her use of materials, such as polystyrene and organic matter like aloe, shows a relationship with the environment and the necessary industrial material as a way of envisioning a Caribbean future.

Just as Anzinger explores incongruity, Andrea Chung, who is of Jamaican Chinese descent, uses her work to question the Caribbean’s colonial and postcolonial experiences. Perception, truth, and seeing are juxtaposed. A series of styrofoam heads covered with wigs of coiffed, and some unkept, European hairstyles is not typical “paradise”, leaving viewers to question their own stereotypes.

“The Other Side of Now” does not force artists into themes. Instead the question of what does a Caribbean future look like was purposely left open-ended, allowing them to explore their perspectives, experiences and creativity, producing a hybridity of voices that touches the region.