It’s not just his 30 years of experience as a Board Certified Civil Trial Lawyer, the success of the law practice, Hamilton, Miller & Birthisel, LLP (HM&B), he founded with two colleagues in 2006, or the national and industry accolades he has received. Attorney Jerry D. Hamilton says it all boils down to authenticity and know how. 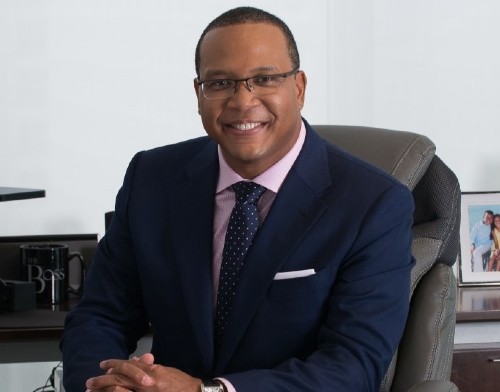 Attorney Jerry D. Hamilton“It’s important that you be yourself. If people recognize who you are and what you are about, then they gravitate to that authenticity,” said Hamilton, adding: “None of the flash is important if you really don’t know what you’re talking about. So, the preparation, the work ethic, and the competence, you add that to who you are, and that authentically shines through. I think that is one of the reasons that I have done well.”

The Jamaican-born lawyer has been recognized as one of the Top Ten Defense Lawyers in the United States by one of the largest insurance companies in the world. He has been named 2022 Lawyer of the Year by the legal fraternity for his work in maritime law and insurance litigation. And these are just a couple of the honors bestowed on Hamilton for his work.

Hamilton was quick to point out that his success and that of the firm is not just about him. He noted that he has a team of dedicated lawyers working with him. We are the largest black-owned firm in the state of Florida he confirmed.

“I think the recipe for what I believe has been the successes that I have had and the successes the firm has had is the authenticity, the preparation, work ethic, the competence, and the team behind you.”

In fact, HM&B’s practice areas include Admiralty and Maritime Claims, Insurance Defense, Commercial Litigation, Personal Injury and Wrongful Death, Medical and Professional Malpractice, among other areas. Although there has been many successes, these cases are not always about celebration based on the nature of the circumstances said Hamilton.

“When I’m called in to represent clients, generally there has been some disaster, some catastrophe, or some tragedy. Under those circumstances it’s not necessarily something to celebrate because there are a lot of people who have been hurt, passed away, and families are hurting,” the lawyer explained.

The El Faro event was one such case. Hamilton explained that El Faro was a cargo ship that left Jacksonville in 2015 on its way to Puerto Rico with 33 crew members in addition to its cargo. Unfortunately, the vessel encountered Hurricane Joaquin and the crew and the ship were lost at sea. HM&B was the lead trial counsel on the case.

“It was my proudest moment because what I saw was the entire industry that I represented come together to really resolve all those claims and to take care of the families within 19 months. We were transparent, we communicated well, we had great teamwork.”

“It taught me a lot about recognizing that our job is not only just to be a mouthpiece for corporations. but we have to make sure we are sensitive and compassionate to the families and make sure the companies do the right thing. Because it’s not just about profits over safety.”

Hamilton has the natural mannerisms and confidence it takes to be a good lawyer. So, did always aspire to the legal field? One thing is for sure, it is in his blood. Not only is his father a lawyer who still practices in Jamaica, his grandfather was also an attorney. But, this third-generation lawyer had to first let loose the rebel in him before recognising his true calling.

After graduating from one of Jamaica’s noted high schools, St. George’s College at 16 years old Hamilton migrated to the United States and decided to take up accounting, just to break the tradition. But, after his first year his accounting professor told him to quit, it just wasn’t his game. Then he saw the lawyer within himself.

“I can tell you that it truly came from watching my ‘old man’ and having my mother being so supportive and pushing me in that direction. So, that’s why I became a lawyer. I’ve not regretted it. It’s been 30 years and I’ve loved every minute of it,” said Hamilton.

So, how does he prepare for a case, especially those that could probably go through years of litigation based on their nature. The celebrated lawyer said it’s all about quiet time.

“I really just need to be in my thoughts and to be sitting down quietly being mindful of what it is that I need to do. I’m thinking about it in multiple ways because even though I have gone to law school and even though I am a Board Certified trial lawyer, remember that the folks I will be standing up in front of in a court room didn’t go to law school. They are not going to understand the legal vernacular that I’m going to throw at them.”

His next move? He comes up with the simplest way to explain the case, then talks to his children about it. And if they get it, then he’s on the right track. If they they don’t get it, he goes back to the drawing board and locks himself in a room.

“Whether you test it with your children or a mock environment with others, you have to test it and get the feedback to make sure that you’ve honed it to a pinpointed theme. Then you tell your story. Because at the end of the day it’s storytelling, with a mixture of what the law says.”