“Garvey Among the Most Influential World Leaders of All Time” - Grange

The Jamaica Cultural Development Commission an agency of the Ministry of Culture, Gender, Entertainment and Sport celebrated the 134th anniversary of the birth of Jamaica’s first National Hero, the Right Excellent Marcus Garvey with a floral tribute at his tomb at the National Heroes Park on Tuesday, August 17. 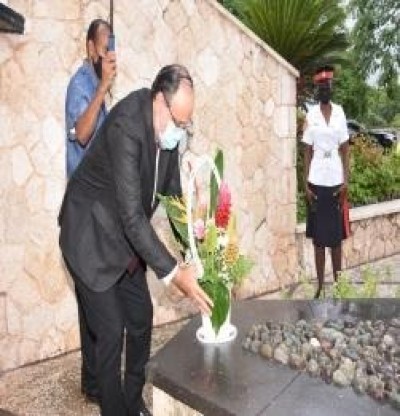 During her welcome remarks, the Minister of Culture, Gender, Entertainment and Sport, the Honourable Olivia Grange reflected on Mr. Garvey’s contribution as Jamaica’s first National Hero:

“We can proudly say here, and on any platform, at anytime, anywhere in the world that Marcus Garvey is among the most influential leaders the world has ever known. Emerging from humble circumstances in rural Jamaica, Marcus Garvey’s accomplishments internationally were sufficient for him to be regarded as a national hero, not only at home but aboard especially amongst those of African descent,” Grange said. 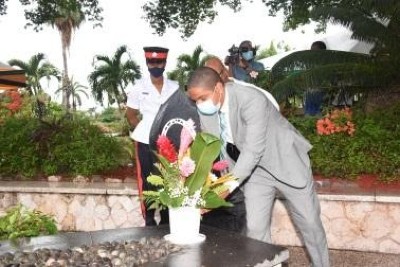 His Worship the Mayor, Senator, Councillor Delroy Williams, Mayor of Kingston and St. Andrew lays a floral arrangement on the shrine of the Jamaica’s first National Hero, the Right Excellent Marcus Garvey, to commemorate the 134th anniversary of his birth on Tuesday, August 17, at National Heroes Park in Kingston.

Minister Grange highlighted that the Garvey movement was the greatest international movement of African people’s in modern times. It has been recorded that at its peak, the movement counted over eight (8) million followers. Marcus Garvey was the first (1st) to articulate the concept of African Nationalism, the concept of Africans in the Diaspora returning to Africa to build a great nation of their own.

The commemorative event also saw musical tributes being made in song by Andrew “Abijah” Smith tiled Revelation and the harder they come respectively, while by Rory Baugh sang you’ll never walk alone.

Marcus Mosiah Garvey is Jamaica’s first National Hero and was born in St. Ann’s Bay, St. Ann, on August 17, 1887. During his career Garvey travelled extensively throughout many countries, observing the poor working and living conditions of black people. In 1914 he started the Universal Negro Improvement Association (UNIA), in Jamaica. He was conferred with the Order of the National Hero in 1969 as per the second schedule of the National Honours and Awards Act.

The UNIA, which grew into an international organization, encouraged self-government for black people worldwide; self-help economic projects and protest against racial discrimination. Garvey’s legacy can be summed up in the philosophies he taught – raceed for African unity; self-reliance; the need for black people to be organized and for rulers to govern on behalf of the working classes.