NEW YORK, New York – In recognition of Black History Month 2022 and its theme of Black health and wellness, Caribbean American legislators in New York are celebrating the “contributions, triumphs and tribulations” of Blacks who have shaped the United States and those who continue to do so. 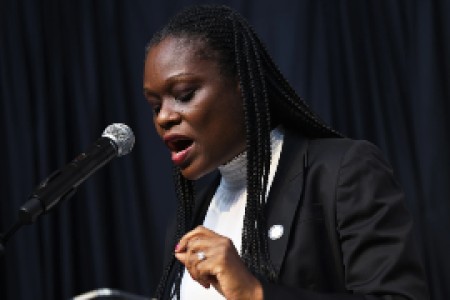 Rodneyse Bichotte Hermelyn (Getty Images)“Black History Month is not only a celebration of the pioneering contributions of those who paved a trail before us but also a driving force to continue their fight for equality,” Brooklyn Democratic Party Chair Assembly Member Rodneyse Bichotte Hermelyn, the daughter of Haitian immigrants, who represents the 42nd Assembly District in Brooklyn, told the Caribbean Media Corporation (CMC) on Wednesday.

Bichotte Hermelyn said she was committed to making health care accessible for New Yorkers, and particularly for the many people of colour struggling to access quality care.

The assemblywoman also recognized two Black pioneers from the past and present: Brooklyn’s first Black elected official Bertram L. Baker who migrated from Nevis in 1915, when he was 17 years old, and Dr. Kizzmekia Corbett, a Black woman praised as key scientist behind the COVID-19 vaccine.

Baker was a member of the New York State Assembly from 1948 to 1970, representing central Brooklyn, New York. During his tenure, he Baker sponsored bills prohibiting various types of discrimination, most notably New York’s fair housing law, the Metcalf-Baker Act, which was one of the first laws anywhere that outlawed discrimination in housing.

Bichotte Hermelyn noted that Dr. Corbett was recently highlighted in the Time’s “Time100 Next” list under the category of “Innovators”, with a profile written by Dr. Anthony Fauci who said Dr. Corbett and her colleagues have been “central to the development of the Moderna mRNA vaccine and the Eli Lilly therapeutic monoclonal antibody that were first to enter clinical trials in the US and now have authorization for emergency use”. 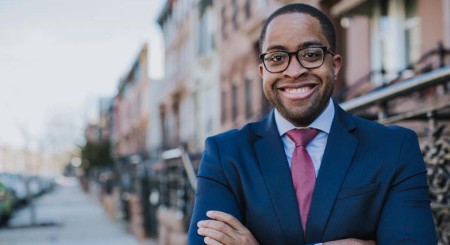 “As a result, her work will have a substantial impact on ending the worst respiratory disease pandemic in more than 100 years,” Dr. Fauci wrote.

Council Member Crystal Hudson, the newly-elected representative for the 35th Council District in Brooklyn said that as she closed out her first month in office, she welcomed Black History Month with a renewed sense of purpose, commitment and determination.

“I want to be clear about my focus on addressing systemic inequities of Black folks in our city,” Hudson, whose grandparents hail from Jamaica, told CMC. “The numbers don’t lie: Black New Yorkers experience the worst health outcomes, bear the brunt of the COVID-19 pandemic, continue to be underserved by our education and housing infrastructure, and have the highest rate of unemployment in our city.

“Every day, my team doubles down on our mission to serve those who seek our assistance, while addressing the systemic issues facing marginalized communities. We recognize that when the material conditions of our most marginalized populations are improved, we enhance the well-being of our entire city,” she continued.

New York State Senator Zellnor Y. Myrie, whose grandmother hailed from Jamaica, has unveiled a package of legislation, kicking off what he describes as “Black Future Month”, to address persistent racial health disparities impacting New Yorkers of color. It includes banning the use of “bug bombs”.

He said 1.5 million New Yorkers suffer from asthma, and people of colour are over 300 percent more likely to be exposed to polluted air, a trigger for asthma, than their white counterparts.

“This bill would restrict the use of total release fogging pesticides, commonly known as ‘bug bombs,’ from consumer sale and prohibit their use in multi-unit commercial buildings,” said Myrie who represents the 20th Senate District, pointing to a 2019 study, which says these products were largely ineffective in eliminating pests but likely to disperse insecticide where humans are likely to come into contact with it, exacerbating asthma and other respiratory effects.

Myrie also announced the Chisholm Chance Act that would direct millions in additional resources to create a maternal health hub at SUNY-Downstate Hospital, located in the epicenter of the severe maternal morbidity crisis in Brooklyn.

The Act is named after late Caribbean American Congresswoman Shirley Chisholm, the daughter of Barbadian and Guyanese immigrants.

“Severe maternal mortality rates are as much as three times higher among Black women than white women, and these rates have been going up, not down, in recent years,” Myrie said. “The Chisholm Chance Act would invest in women-of-color led community-based organizations that support maternal and children’s health.”

In addition, he introduced said the Predatory Marketing Prevention Act (PMPA), noting that obesity and related co-morbidities are currently the second leading preventable cause of death in the US.

“New Yorkers living and working in lower-income neighborhoods are exposed to almost twice the proportion of predatory food and beverage marketing messages as those in higher income communities,” Myrie said. “PMPA would allow state regulation of food industries that advertise unhealthy foods which cause child obesity, diabetes and other harmful effects.

“Make no mistake, through its actions and inactions, government has helped create these racial health gaps over many generations of neglect, disinvestment and discrimination. Now, government must play an active role in closing these gaps. This package of legislation will help us imagine a healthy and equitable future where Black people and all people can thrive.”