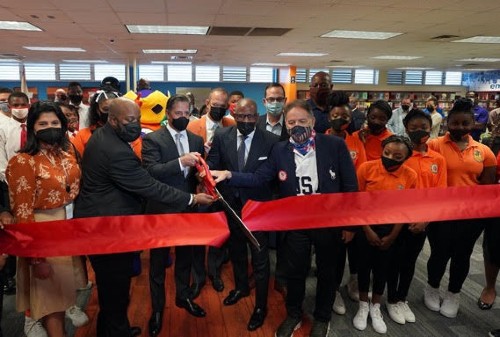 Eighth-grader Richkard Francois, who gave the Student Welcome at this morning’s ceremony, was excited about being a part of this event. “I get to witness the whole place and it’s nice knowing that a lot of people are going to get educated here.”

Richkard was also happy with the new colorful walls, furniture and equipment. “I’m mostly looking forward to using the iPads and the soft, comfortable seating everywhere. I really like the couch and that I’ll get to sit back and enjoy while studying.”

The partners will continue to unveil new projects throughout the year in support of the District’s MSR initiative, which is intended to meet the unique social, emotional and academic needs of teachers and their students.