BRIDGETOWN, Barbados –The High Court has ruled that the Barbados Union of Teachers (BUT) had to be properly consulted about fundamental changes to terms and conditions of members’ employment. 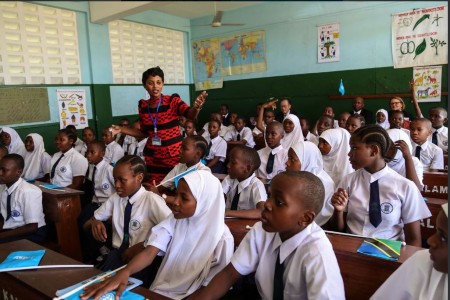 A teacher in a classroom in Barbados (Photo: CARICOM)But Justice Shona Griffith upheld the government’s right to make changes, she dismissed the policy because it was made unilaterally.

The BUT had gone to the High Court on the contentious issue of paid term’s leave, based on a change in policy made more than five years ago.

The BUT has since indicated that it is now preparing to engage Education Minister Santia Bradshaw on the matter that initially arose under the Freundel Stuart administration, when in 2016, teachers were stripped of their entitlement to leave with full pay after 15 years, and after that, once every five years until retirement.

Without consulting teachers or their representatives, the government determined that teachers would receive term’s leave only once after 15 years and again prior to retirement.

Attorneys Gregory Nicholls and Jeriah Rock, who represented the BUT president Pedro Shepherd, and eight others, argued the Ministry’s action was unlawful, on the ground that it was a significant change to the longstanding General Orders of the Civil Service that are now set out in Section 33 of the Public Service Act.

While they asked the High Court for judicial review of the Ministry’s decision, they also argued that their clients had a legitimate expectation of consultation with their employer regarding fundamental changes to the terms of their employment.

In her ruling, Justice Griffith said the Ministry of Education had a right to make the change without a statutory instrument, given that the General Order in question was based on an administrative policy as opposed to an Act of Parliament.

But she said that the manner in which the changes were made was unlawful and that the Ministry had a duty to consult with teachers before making the fundamental change.

“It is a significant decision to the extent that it clarifies what the General Orders are in relation to the setting of terms and conditions for public officers in Barbados and it also affirms that the Government cannot unilaterally alter the terms and conditions of public officers, particularly teachers, without any consultation,” Nicholls told Barbados TODAY after the judgment.

He said teachers learnt about this change of policy after the government had implemented it.

The teachers also challenged the abatement of their salaries for attending trade union meetings, but this was conceded by the Government more than a year ago and some affected teachers are said to have been reimbursed already.