Take a Seat at the Writer's Desk

These three books by masters of narrative nonfiction are a godsend to aspiring writers looking for an inexpensive alternative to a costly MFA degree. 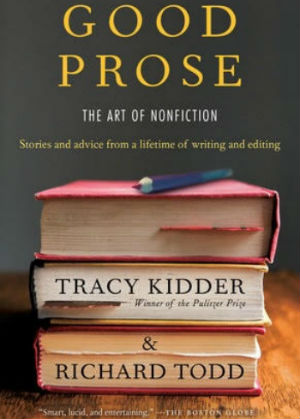 In Good Prose: The Art of Nonfiction (Random House, $17), Tracy Kidder and his longtime editor, the late Richard Todd, provide an intimate look at the painstaking process of fashioning creative nonfiction. As expected, most valuable is their chapter on being edited and editing. "You have to learn how to be edited," Kidder writes, while Todd modestly concedes that, for an editor, the "surest way to harm a piece of writing is to impose one's own style on it."

John McPhee has spent nearly six decades as a staff writer at the New Yorker, and during that time his writing has encompassed subjects as diverse as the college basketball career of Bill Bradley, oranges and geology. Part memoir, part instruction manual, Draft No. 4: On the Writing Process (Farrar, Straus and Giroux, $16) generously, and often humorously, invites readers into McPhee's creative process, with an especially useful discussion of narrative structure, something he cautions is "meant to be about as visible as someone's bones."

The intensely focused career of Robert A. Caro couldn't be more of a contrast with the breadth of McPhee's. Working: Researching, Interviewing, Writing (Knopf, $25) collects a series of pieces that focus on Caro's deep engagement with the lives of two men--New York City planner Robert Moses and Lyndon B. Johnson--that began in 1966 and continues to this day, as he works on the fifth volume of his epic Johnson biography. Early in his career as a journalist, an editor admonished Caro to "turn every page," and the book's insights into mining documents, as well as the art of interviewing, are especially instructive. --Harvey Freedenberg, freelance reviewer