Inside the White House

Could former President Barack Obama have known into just what world his reflections on the 44th presidency, A Promised Land(Crown, $45), would be released? 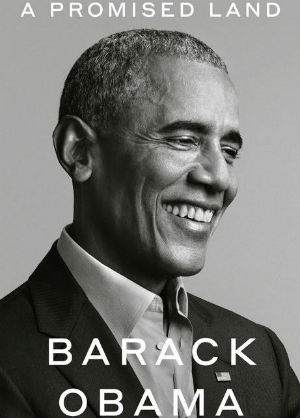 Although his memoir is embargoed until Tuesday (no bookstore is allowed to even open the boxes until then), an excerpt in the New Yorker gives readers a taste of what the highest office in the land was like for the first Black president--a husband and father of young children, a policy wonk, a student of history and a gifted writer.

Obama describes the first spring in the White House, as Sasha and Malia enjoy a swing set he had installed in front of the Oval Office; he looks up from his desk to glimpse "their faces set in bliss as they soared high." His appreciation for Bo, the family's Portuguese water dog ("what someone once described as the only reliable friend a politician can have in Washington"), gives way to an homage to Ted Kennedy, who gave the Obama family the puppy. Obama's gratitude seamlessly leads to his respect for Kennedy's passion for and commitment to universal health care, a torch Kennedy carried through seven presidents--and Obama's history of each.

Barack Obama's gift for the lilt and cadence of language enables him to meld the personal and political so fluently that readers who come to the book out of curiosity about the man and those hungry for behind-the-scenes political negotiations can both be satisfied. "My interest in health care went beyond policy or politics; it was personal, just as it was for Teddy," he writes. He acknowledges both the weight and the honor of carrying his responsibility as the country's leader, and mourns the loss of being "an ordinary dad" who could take his girls out for ice cream without "a major production, involving road closures, tactical teams, and the omnipresent press pool." He lays out on the page both the loneliness and the euphoria of being president of the United States. --Jennifer M. Brown, senior editor