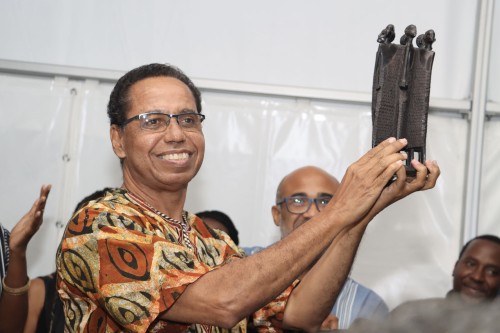 “The Presidents Award is presented to individuals and institutions whose work is noted for its excellence and for combining literary, cultural, and liberation components in the service of progress, of their people or nation, and of humanity,” said Lasana M. Sekou, HNP’s consultant to the list fest.

“This is an unexpected gift,” said Comissiong while accepting the ebony statute award before the 120 plus guests that filled the literary big tent, said Reiph.

The festival’s Main Book Launch and Closing Ceremony — dedicated to noted Bajan novelist and political thinker George Lamming (8 June 1927 – 4 June 2022) — was held at the Port of Galis Bay, overlooking Marigot harbor with the night lights of Anguilla in view across the channel.

The theme of book fair 2022, “The Rebirth,” had already been elaborated on by Comissiong in his keynote at the Opening Ceremony of the festival in the garden of the Government Administration Building in Philipsburg, June 2.

Over the three book fest days, some 38 guest authors from Canada to Australia, the St. Martin public, and visitors to the island at book fair activities had come to know David Comissiong as Barbados’ Ambassador to the Caribbean Community (CARICOM) and to the Association of Caribbean States (ACS). https://bit.ly/3O9uOe3.

“Few knew that he was a former senator in the government of Barbados and that he was born in St. Vincent,” said Reiph.

Comissiong is also a founder-member of the Caribbean Pan-African Network (CPAN); the Clement Payne Movement of Barbados; the Caribbean Chapter of the International Network in Defence of Humanity; and the Global Afrikan Congress (GAC).

Comissiong was an architect and the first director of the Barbados Government’s Commission for Pan-African Affairs (CPAA). According to the lit fest booklet, he represented the Caribbean region at the 7th Pan-African Congress in Uganda (1994).

Comissiong played a key role in the United Nations’ World Conference Against Racism in South Africa (2001); and has represented the Diaspora on the African Union’s Economic Social and Cultural Council (ECOSOCC).

Since 2012, the alumnus of The University of the West Indies (UWI) has served as a member of Barbados’ National Task Force on Reparations.

An attorney-at-Law since 1984, Comissiong is the author of The Wide Streets of Tomorrow: Essays and Speeches, It’s the Healing of the Nation: The Case for Reparations, The Pan-African Love Story of Arnold and Mignon Ford; and The Year 1953 and the Shaping of the Soul of Guyana (pamphlet, 2022).

The Presidents Award is named after the presidents of Conscious Lyrics Foundation (CLF), House of Nehesi Publishers (HNP), and the University of St. Martin (USM), said Reiph.