KINGSTON, Jamaica – Prime Minister Andrew Holness says there is no truth to the notion that persons can be detained indefinitely under the State of Public Emergency (SOE). 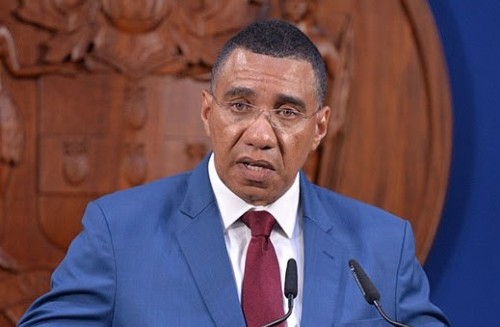 Prime Minister Andrew Holness“Nothing could be further from the truth. Under the emergency powers regulations now in place, the Emergency Powers Review Tribunal … must review the cases brought before them in order for any person to be detained for more than seven days,” he pointed out.

“So, this notion that… the SOEs allow the security forces to scrape up or net fish and detain persons arbitrarily, without charge indefinitely, is absolutely not true.”

He said the Emergency Powers Regulations that govern the measures are different from those with which the court recently took issue.

He was referring to the case of taxi operator Roshaine Clarke who was awarded J$18 a million (1 Jamaican dollar=US 0.008 cents) in damages by the High Court in June this year for being unlawfully detained for seven months under the SOE that was declared in the western parish of St James in January 2018.

Holness said the Government has taken “a lot of care and diligence” to go through the various issues raised by the court and has made the relevant changes.

He added that the SOEs will not cripple business or commerce.

“In this iteration of the SOEs, bearing in mind that we are approaching the Christmas season, the powers that will be deployed in the SOEs will be mindful of commerce, entertainment and of persons’ movement,” Holness noted.

Meanwhile, the Prime Minister said that an upgrading of the Constitution is needed so that the security measure can be easily and effectively utilised to deal with modern threats.