The coalition of Team Unity, led by Prime Minister Dr. Timothy Harris, was returned to power in St. Kitts and Nevis following last month’s general elections in the Caribbean nation. 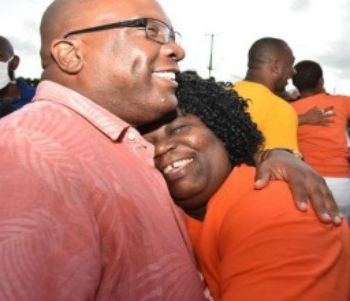 The CCM won all three seats on the island of Nevis. Harris comfortably won his Basseterre Constituency Number 7 seat. He was sworn in as prime minister for a second term on June 7.

“I promised I would not let you down and promised the administration that I would lead will not let down the people of St. Kitts and Nevis,” Harris said.

He praised the performance of his government, which he claimed led to the coalition’s victory and noted that the general elections were a consensus on how the population wanted the country to be run..

“Our performance really lived up and indeed some will say surpassed the promise we had made,” Harris said.

“(On June 6) we the people of St. Kitts and Nevis made history again as the first coalition government in the federation to return after an election with an increased majority.”

Dr. Denzil Douglas, leader of the Opposition St. Kitts-Nevis Labor Party (SKNLP), won his St. Christopher Number 6 seat. However, Dr. Douglas, said the elections had been “hijacked in large measure by the many irregularities and anomalies that took place.”

Up to press time he had refused to concede the polls were “free, fair and free from fear.”