NASSAU, The Bahamas – A disease is ravaging reef-building corals and endangered species in The Bahamas as it moves undetected on the currents of waves and likely in the ballast water from ships. 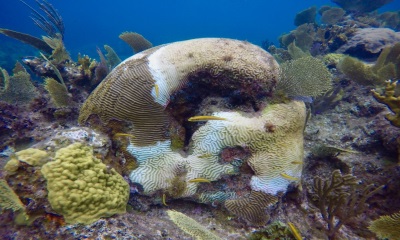 SCTLD has damaged reefs in New Providence.A new report by the United States-based Perry Institute for Marine Science (PIMS), noted that the presence of Stony Coral Tissue Loss Disease (SCTLD) has been confirmed in New Providence, less than three months after its deadly presence in Grand Bahama was publicly revealed.

According to PIMS, a non-profit organization committed to protecting oceans, the only sign of SCTLD’s troubling presence is the white exposed skeleton left in its wake.

Last month, a rapid assessment team led by PIMS senior scientist Dr. Krista Sherman surveyed the six sites between Columbus Cove on the northwest end of the island and Lighthouse Boulders, off the western end of Paradise Island near the entrance to the port of Nassau. Photographs which were shot by Jenna Chaplin, a concerned Nassau resident, suggested stony corals surrounding New Providence were losing tissue, just like vast areas of shallow reefs in Grand Bahama, whose infection PIMS confirmed in March.

According to PIMS, more detailed assessments are needed to help conclude what is driving the severity of cases, with Dr. Craig Dahlgren, PIMS executive director and marine ecologist, noting “for corals, this disease is as easy to catch and transmit as the common cold and has the mortality rate of Ebola.”

Corals typically face several threats, including nearly a dozen different diseases. Each disease normally infects only about two to three species. In the case of SCTLD, roughly half of coral species in the Bahamas are susceptible. Being more lethal and spreading faster means SCTLD could potentially kill coral in a matter of weeks.