Praying for Peace in the Midst of a Crisis

COCONUT CREEK, Fla.  – Local religious leaders are invited to Food For The Poor to pray for peace and continued blessings for humanitarian aid toHaiti. 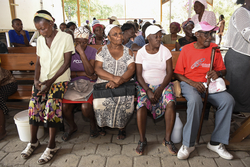 A special prayer service, followed by a reception is planned for Thursday, Feb. 28, from 4 to 6 p.m. at its headquarters, 6401 Lyons Road, Coconut Creek, Fla. ContactSpeakers Bureau Manager Stephanie William at (954) 427-2222, ext. 6633. She also can be reached at This email address is being protected from spambots. You need JavaScript enabled to view it..

The Caribbean nation had been dealing with weeks of unrest that erupted into violent protests on Feb. 7,sparked by people upset with theHaitian government over inflation, and food and fuel shortages.

“Many fear this current crisis, even though it appears to have settled downfor now, will be worse than the 2008 food crisis and could have repercussions for months,” said Food For The Poor President/CEO Robin Mahfood. “Our greatest concern is for the poor,especially the children, and the sickand elderly. We are asking the local religious leaders for their prayers, as Haiti needs bothhumanitarian aid and prayers.”

Food For The Poor-Haitiorganized a fleet of 20 trucks, escorted by a police force,to distribute food and medicine at local churches near Port-au-Prince.Last week, Food For The Poor sent a tractor-trailer load of food from its Florida headquarters to Haiti.

The charity also is preparing to ship 181,000 MannaPack rice meals packaged on Feb. 14 by compassionate volunteers in Parkland. The mobile packing eventwas hosted by Food For The Poor’s longtime partner Feed My Starving Children to honor the shooting victims at Marjory Stoneman Douglas High School.

Fifteen tractor-trailer loads of rice are due to arrive in Port-au-Prince and 12 additional containers filled with more food, medicine and medical supplies are also on the way.

Food For The Poor, one of the largest international relief and development organizations in the nation, does much more than feed millions of the hungry poor primarily in 17 countries of the Caribbean and Latin America. This interdenominational Christian ministry provides emergency relief assistance, clean water, medicine, educational materials, homes, support for orphaned or abandoned children, care for the aged, skills training and micro-enterprise development assistance. For more information, please visit www.FoodForThePoor.org.